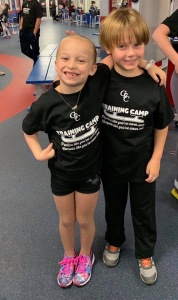 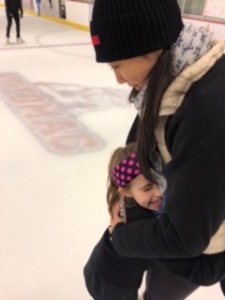 Matt3a Click on this link to see a super first EVER 3a by camper Matt Nielsen…earning him a $300 recognition reward!

Sarah is a longtime G2C camper.  She is now in college at Miami of Ohio as a rising junior and skates on their award winning international synchro team. This year, Sarah took on the leadership role as a counselor and assistant to director Joy Wells.  Congratulations Sarah. 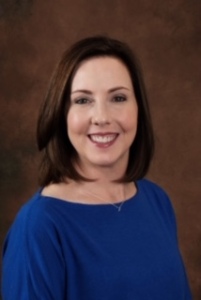 A two-time U.S. Olympic Team coach, Audrey was given the highest award in the industry when she was named PSA and USFSA Coach of the Year in 1999. She has her PSA World Coach Ranking and is Master Rated in Figures and Freestyle.

Audrey specializes in elite training for singles competitors and choreography.  She is currently mentor to a number of developing elite coaches.

Audrey was the keynote speaker for the 2000 & 2003 PSA Conferences and the 2005 & 2006 Canadian Coaches Conferences. She has served on the Board of Directors for the PSA and for various USFSA committees, as well as the United States Olympic Committee (USOC). As a member of USOC’s “Developing Young Champions” subcommittee, she has organized and directed numerous G2C seminars.

Nick Perna is a PSA Master Rated freestyle coach and jumping pole expert. A former pairs skater, Nick has carved out a niche in the sport with his unique training device, earning him the moniker, “The Fishing Pole Guy.”

Two-time National Champion Michael Weiss and Olympic Champion Sarah Hughes are among the many users of his harness.

Nick coached Christine Lee at the World Championships in 2001.

Jeremy Allen was an American Pairs Figure Skater, and competed as a member of the US International Figure Skating Team at both the Junior and Senior level. He won the US Junior National Pairs Championship in 2001 and placed top 5 at the Junior World Championships. Since retiring from competitive skating in 2005, he has focused his attention on bringing up the next generation of competitive skaters as a fulltime Coach. He has a total of 16-years of coaching experience and has coached numerous skaters to US National medals and International appointments. On the world stage, he has coached skaters to the ISU Championship level (Four Continents). While a resident of the greater Chicagoland area, he has helped skaters such as Jason Brown, Alexa Scimeca and Bradie Tennell on their rise to prominence in the sport. As a major career highlight, Jeremy accompanied 2018 U.S. National Champion Bradie Tennell at the Olympic Games in Pyeongchang, South Korea.

Kalle has Swedish Figure Skating Associations highest level coaching education (level 4) as well as having studied Sport management at the University of Gothenburg.

Chris Conte is a PSA-rated coach and choreographer based in Newark, DE.  He has been a jump consultant to multiple World and Olympic coaches and skaters from the US, Japan, Korea, Russia, Canada and Mexico.  He has also created programs for skaters from around the world.  An expert in Dartfish, he uses this cutting-edge technology to help skaters speed the learning process and troubleshoot jumps. Chris has given technology presentations at the PSA World Conference.

He was a principal skater with Ice Capades and Disney on Ice, and also has performed with professional ensemble companies including The Next Ice Age and Ice Theatre of New York. He is also a Certified Instructor of Therapeutic Pilates

Charyl Brusch has been coaching for over 30 years in Northern California. In addition to her duties as head coach to many skaters, Charyl is one of the most respected spin specialists on the West Coast of the United States. She has been specializing in spins since the late 1990’s.   2018 National Junior ladies champion Alysa Liu and 2018 National Junior mens silver medalist, Dinh Tran are both students of Charyl’s in spins.

She is an IJS technical specialist and can help skaters maximize their spin points.

Prior to becoming a full-time coach, Charyl had toured with Ice Capades and appeared in Charles Schulz productions.

Tommy trained under the tutelage of Audrey Weisiger for over 10 years and coaches in the Northern Virginia area.  He specializes in jump technique and choreography, and recently received his PSA Master rating in free style and choreography. Some of the choreographers he has worked with include Pasquale Camerlengo, Chris Conte, 2008 World Champion Jeffrey Buttle, Kirov Ballet Master Vladimir Djouloukhadze, and Dance Company Instructor Debbie Street.

Tommy is available to do pole harness and off-ice jump technique and off-ice harness.  He head coached US National competitor Hannah Byers.

He was also the 2006 recipient of the “Champion in Life Award” alongside Emily Hughes, and a member of the 2006 State Farm/USFSA Scholastic Honors Team for balancing success in school and skating.

He is a graduate of George Mason University with a degree in business and dance.

Chris is a PSA Rated Professional in his 30th year of experience. He is a US National and International competitive free skating coach while producing Gold Testers in Free Skating, Ice Dancing, and Moves-in-the Field. Chris has been a prestenter and host of several seminars for coaches and skaters and has held program director postions since 1995. He works as a primary and secondary coach and is happy to work with skaters of all ages and levels from basic skills and up. In addition to pole harness work, he is also certified in hockey power skating.

Adam Blake’s style of skating and choreography has been described as passionate, hard-hitting, and impactful. His proficient knowledge of trick skating maneuvers like cantilevers, boot slides, and backflips gives him a unique spin on traditional figure skating.

As a touring principal skater and assistant line captain with Disney on Ice, Adam has traveled the world and has had the opportunity to dance in New York City, Manchester, Vancouver, Panama City, and Los Angeles.

In 2011, Adam was the winner of our second Young Artists Showcase choreography competition. Adam is currently serving on the board of directors for Proskaters and the Proskaters Historical Foundation.  Adam recently choreographed the closing number for the Smuckers spectacular at the US National Championships and the Opening ceremonies at the 2016 World Championships held in Boston.

She holds a Bachelor’s Degree from George Mason University in Athletic Training.

Caroline Silby, Ph.D., M.Ed, received her Doctorate and Master’s degrees in Sports Psychology from the University of Virginia. Her specialty is performance enhancement with adolescent athletes and she’s worked with Olympic champions in gymnastics and figure skating.

Currently, she serves on the Advisory Council for the Women’s Sports Foundation and as a faculty member of both the USA Gymnastics and the U.S. Figure Skating Association training camps.

Camp registration is now closed.  Thanks everyone! See you in Virginia.

Coach Registration is still open-click link to sign up

This summer, G2C Training Camp will be held in Woodbridge, VA at the Prince William Ice Center.   The rink is located close to a variety of places of interest, near  Washington, DC,  Alexandria, VA, Fairfax, VA  and Dale City, VA; there are plenty of family amusements, hotels and shopping malls for a fun and convenient visit.

G2C Training Camp is an intensive week of on- and off-ice training for competitive figure skaters who aspire to develop into elite level competitors and professional performers.

Nationals, family and military discounts available!  Contact Shauna Proke for promotional code to use during registration. 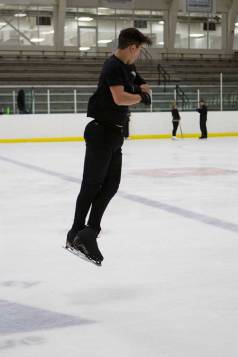 This year, G2C Training Camp provides a comprehensive, full-body-and-mind training experience for young skaters who are working on their axel, double jumps and higher jumps, with on-ice and off-ice instruction designed to:

We offer two tracks of participation, both include the parent education classes.

Camp registration is now closed.  Thanks everyone!

2019 Training Camp is an Endorsed Educational Event and coaches can receive 16 PSA educational credits for attending.  $75 to register and if a coach has 3 or more skaters, then G2C will pick up the tab.

A typical day at G2C Training Camp starts at 8 AM and skaters are at the rink until 4 PM with many activities, including both on- and off-ice classes, discussions, group numbers, and private lessons, as well as a lunch break and several snack breaks in between.

Skaters are divided into different groups based on age and ability and they move from activity to activity with a counselor.

Private and semi-private on-ice and off-ice lessons are provided during the week and are a key part of G2C training camp. You can request lessons with certain G2C coaches to hone key skills. Requests for lessons are filled by registrations. Requests are not a guarantee of all lessons being with a particular G2C coach.  Skaters will have the advantage of working with multiple coaches for a well-rounded camp experience.   A minimum number of lessons will be included with the paid tuition for camp.

Get the customized assistance you need as you work with a wide range of industry experts in technical skills, the pole harness, Dartfish and cutting-edge technology, artistry and choreography, and more during the week.

The rink is 30 miles from downtown Washington, DC.  There are numerous hotel options available within a close proximity of the rink.